Home > Steadying the ship: How to lift team performance when morale is low

Steadying the ship: How to lift team performance when morale is low

The mark of any great leader is to continue delivering the goods during times of uncertainty, pressure and flux. Leadership Matters caught up with three award-winning IML ANZ Members, who each lifted their teams’ spirits when the going got tough.

Plain sailing never lasts indefinitely, but the factors that can impact team morale are not always clear cut.

Cindy Welsh MIML, General Manager, Health and Wellbeing at St John Ambulance Victoria, says, “Morale can be impacted by things like corporate downsizing or gearing up for a new contract. Or poor morale may simply have been allowed to fester for some time.”

Paul Hughes FIML points to another way that morale can be sapped. Reflecting on his experience with the Australian Air Force Cadets, he explains, “One of the key reasons people join an organisation is because of its vision and its values. Any deviation from those values can impact morale.”

In Hughes’ case, the challenge of declining morale was the result of stagnation. He recalls, “When I came to 3 Wing (NSW and ACT) Australian Air Force Cadets, nothing had really happened for 10 years. People had lost their way and lost their sense of wanting to deliver an experience that our cadets deserved. There had been no growth, no innovation, and no real sense of direction and purpose.”

In order to manage flagging morale, it’s necessary to recognise the warning signs.

Welsh explains, “A drop in morale can manifest itself through an increase in sick leave, higher staff turnover or poor performance. Or human resources personnel may be noting an increase in behavioural issues – perhaps more employees treating each other or their managers inappropriately. This can be a sign of underlying frustrations.”

She cautions that leaders and managers may ignore the warning signs because the company or department is performing well. Welsh notes, “This can be a sign of the ‘A-team’ syndrome, where competence and results are high. But they are not sustainable over the long term because people are unhappy.”

Welsh adds that business leaders don’t always pick up on how low morale has sunk. “They may ignore the warnings that their senior people have highlighted, or may base their opinion of staff morale purely on their own interactions within the workforce,” she says. “But not all staff are comfortable giving direct and frank feedback to the CEO or business leaders. It’s important to listen to your managers and, if you’ve been given consistent feedback, it needs to be explored.”

BE THERE. BE IN THE MOMENT

Leadership during challenging periods hinges on being visible. Welsh says there can be a “propensity to retreat from people during times of change”. But she adds, “Transparency with your employees is incredibly powerful. Don’t hide things from your staff.”

Welsh recommends, “Sit in the lunch room with your people and talk to them. Just listen. Hear people out. And do not underestimate the power of peer-to-peer influence. It can see low morale quickly spread throughout an organisation – even across different geographical locations.

“Think about how you can tap into influencers,” advises Welsh. “Use their powers for positivity, encouraging them to champion your change or cultural initiatives.”

Hughes suggests a similar approach, saying, “A lot of building morale as a leader involves being prepared to listen and see what you can do about the situation. Be prepared to take action on what people say – it’s not a matter of paying lip service.” He too recommends identifying ‘champions’, who will actively support your cause. “They will help to dispel the cynics,” says Hughes. “After all, peer pressure is the best pressure of all.” 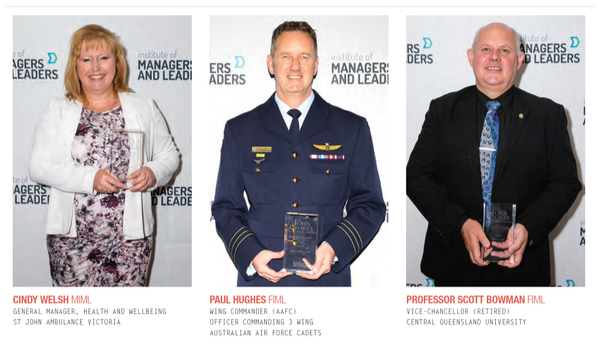 BEING COMFORTABLE WITH FAILURE

There is no one-size-fits-all solution to lifting team spirit, and the approaches of the different leaders interviewed for this article proves the importance of a tailored strategy.

Professor Scott Bowman FIML, recently retired Vice-Chancellor of Central Queensland University, believes the social element of workplace teams can have a significant impact. He says, “It’s all about pulling together a group of people, who really get along well so that you have a team that celebrates shared successes and commiserates when things don’t go so well.”

Professor Bowman notes, “It’s critical for these sessions to have a social element. I quickly worked out for example, that my team were all incredibly bad karaoke singers but they were all prepared to have a go.”

Perhaps surprisingly, Professor Bowman also highlights the importance of making mistakes. He explains, “It’s important for the team to be comfortable with failure. I’m a believer in the 70:30 rule, which says you can expect success 70% of the time and failure 30% of the time. If you have a failure rate below 30% you’re doing something wrong – you’re not trying enough new steps or strategies.”

Of course, the 70% of successes have to compensate for the 30% of failures but Professor Bowman notes, “The key is to pass this appetite for risk-taking down the line through your team. I was always open with my team about the 30% failure rate, and yes, it is unnerving for some people. However, it pays off when you achieve that 70% success rate.”

Welsh holds a similar view. “Foster a ‘no blame’ culture in the workplace,” she advises. “If people think they’ll lose their job because of a mistake, they will never speak up. Employees need to feel psychologically safe and comfortable about admitting to a mistake. Just as importantly, they need to understand what they could have done better and what they have learned from mistakes. Organisations that embrace continuous improvement and adaptive leadership will be the future game changers.”

The ability to accept mistakes extends to leaders also. Hughes notes, “You can collaborate until the cows come home, but ultimately decisions have to be taken. As a leader it’s about not being frightened to make tough decisions.”

Moreover, Hughes says it is important to be able to say, ‘You know what, we didn’t get it right, so what do we need to do now to change this to get the right result?’

HARNESS THE POWER OF PEER REWARDS

For Cindy Welsh, a simple recognition program was instrumental in lifting engagement and workplace morale. She says, “Managers can recognise individual staff, but at St John Ambulance Victoria we introduced the FISH! methodology, which sees peers recognise the efforts of each other.”

As Welsh tells it, prior to the introduction of the FISH! program, St John Ambulance Victoria had peer-to-peer engagement of 52%. Three years later, the program has boosted employee engagement to 95%.

Welsh says, “Thanking and acknowledging peers has now become part of our culture but it has taken time for this behaviour to resonate across the organisation. Increasing peer engagement is a slow burn.”

CREATE A BRAND OR LOGO FOR BONDING

For Paul Hughes, leading a volunteer organisation called for a different response. “We set about identifying how people were really feeling, digging deep into the issues at heart.”

He says, “We found there was no visual identity for the Wing – no branding or logo. So we developed a new logo as a visual identifier, one that best reflected the geographical area we served, which was NSW and the ACT.”

From here, Hughes helped to create a sense of purpose with the mantra ‘Setting the standard, leading the way’.

Hughes was mindful of including all stakeholders wherever possible. “By involving various stakeholders throughout the change process we were able to win over the hearts and minds of our people. This in itself became an integral part of boosting morale.” He adds, “It was about getting everyone on board the journey”.

The reward for Hughes has been a steady increase in the retention rates of cadets and staff over the past four years as well as increasing numbers of people wanting to join Australian Air Force Cadets.

With a keen eye for how your people are feeling, and some tailored strategies, it is possible to steer your team through challenging times.